OpMantek is a relative newcomer to the scene, offering commercialized open source network management software. The company was first founded in 2012 after acquiring the intellectual property for NMIS (Network Management Information System), monetizing the free platform through paid add-on modules and enterprise support.

NMIS has been widely adopted on a global level since it was released back in 1999. It’s scalable, flexible and easy to use, making it a great choice for networks of any size.

NMIS monitors the status and performance of an organization’s IT environment, assists in identification and rectification of faults, and provides valuable information for IT departments to plan infrastructure changes and investment.

On the backend, the Distributed Polling Engine utilizes SNMP to collect performance and availability data from all compatible devices. This information is then made available via the highly extensible GUI interface, with detailed reports for technical analysis and high level overviews for business reporting.

NMIS is free, open source software and licensed under the GNU GPL (General Public license). The latest source code is available for download via Github, which can be modified and/or redistributed under certain conditions.

To financially maintain the development of this product, charges are associated with support and add-on modules which expand the capabilities. We will take a look at the costs associated with these services.

The support tiers are priced by type, technical or developmental, and also the number of nodes.

Add-on modules are optional, yet extremely powerful extensions of the core software that integrate additional features. The official list offers tools for reporting, high availability, charts, trends and much more.

Pricing is calculated on most modules based on the volume of nodes, which we have laid out in a table below. For more detailed information about each type, the various bundle packages and more, you can check out the Product Page on the OpMantek website.

Several other modules are available, including OpAddress and OpSLA, although these are billed by different measurements. OpAddress is licensed per IP addresses and OpSLA is licensed via collectors.

For Unlimited Nodes or Managed Service Providers, you will need to Contact Sales for a customized price quote on support and add-ons.

At the core of NMIS, Fault and Performance Management are responsible for the large majority of the software’s features. Detecting the utilization of individual resources such as processors, memory, disks, network interfaces and more. For efficiency, both performance and fault data are taken in a single poll to minimize network consumption.

These metrics are then stored and graphed for visual representation during normal operations, or passed along to the alerting engine in the event of faults. Should a specified threshold be exceeded at any point in time, notifications are sent to the pre-configured channels for immediate attention.

NMIS monitors all connected nodes in real-time using SNMP, displaying performance and availability in flexible graphs with customizable alerting conditions. The relational status can also be visualized, showing how one device’s performance impacts another device, group of devices or even the entire network.

The unique bit that stands out is the live health baseline feature. It collects the data for this period and compares it to the previous period, making changes in response visible. More so, the OpTrends module further extends this functionality, automatically identifying outliers in the baseline reports and providing notification of concerning trends.

To eliminate bottlenecks and improve redundancy, Distributed monitoring allows for NMIS probes to be deployed throughout a network. This makes it possible to monitor an unlimited amount of nodes, removing any risk that a single point of failure could halt the polling operations.

The entire system uses a single configuration to operate, making the setup process a breeze. Better yet, it’s all included with the core NMIS software free of charge. Just deploy additional probes as needed to balance the load without any concern for fees.

OpMantek recognizes that not all devices are created equally, some are critical to operations and others are a mere nuisance when they go offline. The Business Rules Engine categorizes each device by their impact on the network rather than just technical status.

Event levels are set according to importance, allowing the network administrator to prioritize the infrastructure. At a deeper level, policy based actions, escalations, event handling and notifications are all available to help facilitate proper handling of each situation.

With support for more than 10,000 vendors, NMIS can support almost any device right out of the box. This avoids wasted time spent with manual configurations, the setup can be almost completely automated and finished within minutes (depending on network size).

If it has an IP address, NMIS will be able to manage it, and likely those without network connectivity as well. It supports SNMP v1, v2, v3 and traps.

The basic system requirements for the latest version of NMIS can be found on their website at the following resources.

Software requirements are explained in detail via the NMIS 8 Installation Guide.

Hardware requirements are explained in detail via the NMIS 8 Setup and Configuration PDF.

We will take take a brief look at both documents and summarize the bullet point information below.

OpMantek NMIS v8 has been tested and deployed across a variety of Linux distributions, citing Red Hat/CentOS as a favorite amongst their existing customers. It can run in both physical and virtual environments, available as a pre-built VM appliance, compiling source code or a self-extracting tool.

The following versions have been thoroughly vetted, include operating system specific installation instructions and are officially recommended as being fully compatible.

It’s advised to start with a fresh OS installation, avoiding unnecessary packages like KDE, Gnome, etc. which may conflict with the software. SELINUX should also be disabled if possible, where permissive mode issues frequent warnings and the default mode will interfere.

NMIS does require that PERL be installed prior to starting the setup. Later versions are now distributed as a self-extracting installer and will prompt you with the optional to load Perl if it’s not detected on the system.

The hardware requirements are based on a number of key metrics, but largely decided by the number of nodes (or devices) being monitored.

Other factors will contribute to overall system usage, such as collections frequency, number of collection interfaces and complexity of services / applications being monitored. The key metric for performance is disk write speed performance (IOPS). 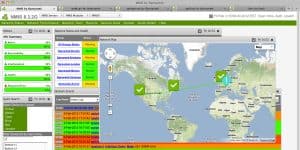 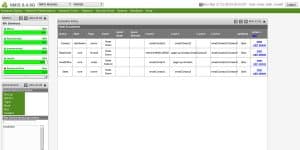 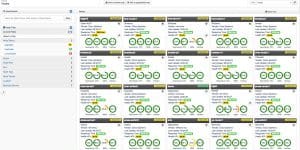 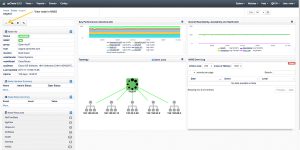 The latest OpMantek NMIS 8 can be downloaded Free from the official OpMantek website at the link below.

A Virtual Application Package is also available, including all free software such as NMIS Community, Open-AudIT and a 20 node license for the most popular commercial modules.