Getting to know your network traffic and its patterns can you save hours in troubleshooting, network capacity planning, or security analysis. Information such as, who are the top talkers on the network, what protocols are they using, and the top destinations are key into a successful network monitoring.

Thankfully, Netflow makes all of that more comfortable.

Netflow is a network protocol that collects information about all the traffic running through a Netflow-enabled device, records traffic data, and helps discover traffic patterns.

Network admins have many reasons for using Netflow. They use it to ensure and improve security by knowing the baseline of where the traffic is and its inconsistencies. An admin can also use it to learn how traffic patterns look like before adding a new device or application. With Netflow, an admin can create billing reports based on bandwidth usage.

What is the Origin of Netflow?

Netflow was initially developed by and for Cisco switching technologies around 1996, since the release of IOS 11.1. Cisco networking devices series 7000, 7200, and 7500 implemented Netflow for the first time.

Now, other networking vendors have added their version of Netflow, such as j-Flow by Juniper, sFlow by HP, NetStream by Huawei, and RFlow by Ericsson.

The latest version of this protocol is Netflow Version 9.  There is a NetFlow v10, referred to as IPFIX which is not considered Netflow but a variance. Still, IPFIX is very similar to Netflow v9 process and structure.

The following is a NetFlow V9 export packet example: 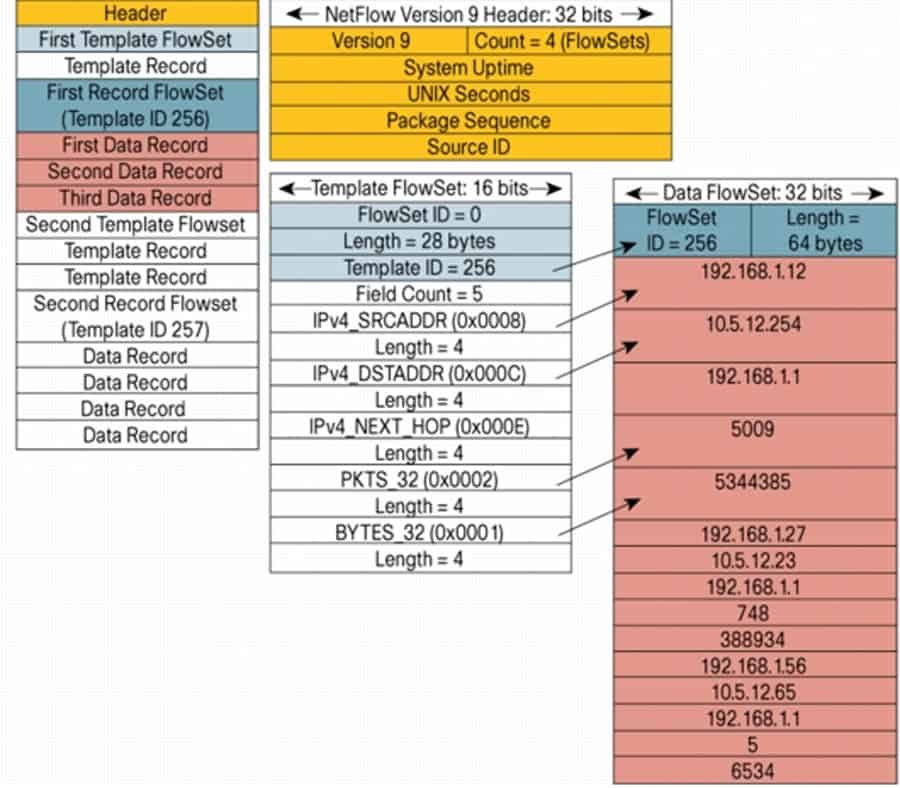 What Information can Netflow obtain?

To be able to obtain traffic information, the NetFlow V9 data communication frames carry a vast arrange of information. The Field Type in the data frame of a NetFlow packet contains information such as (but not limited to):

With this information, Netflow allows devices to create a record for each traffic flow. The device sends these records to a Netflow collector, which analyzes the data and reports statistics (top talkers, top protocols, etc.).

As mentioned earlier, Netflow is a Protocol that Collects Flow Data from the network traffic and forwards it to a collector.The Netflow collector, which consolidates all data, receives the record from the exporter (as shown in the picture below). 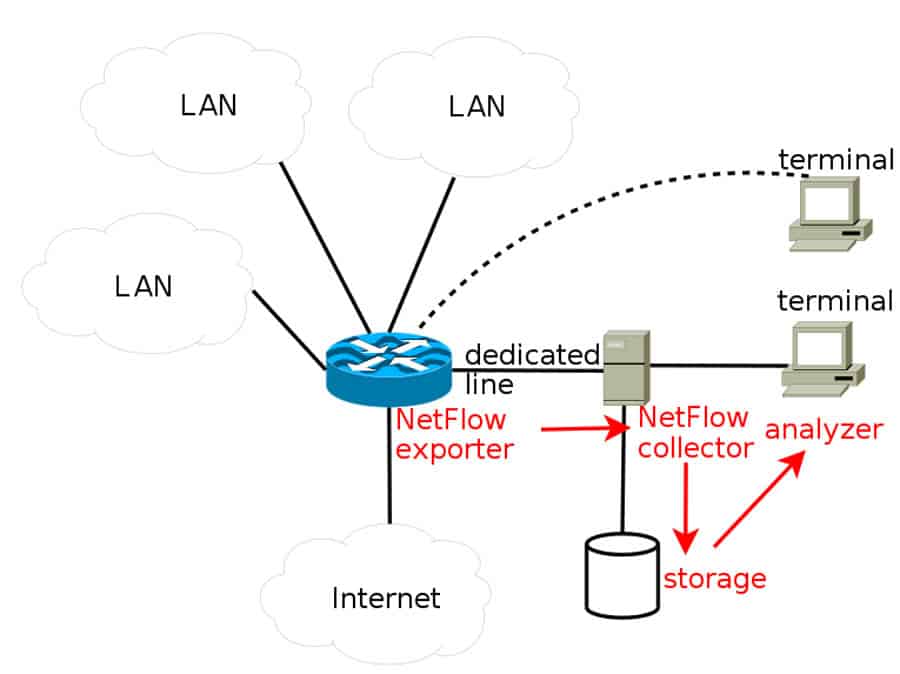 Three fundamental elements usually referred to as Netflow Collector, Exporter, and the Analyzer, play an essential role in Netflow. Their ultimate job is to organize the flow data together into a readable format so that the network admin can analyze (using applications) and make some sense out of the data.

The Netflow records are usually sent using a UDP and received by a collector. The destination UDP port and IP of the collector must be specified on the Netflow Exporter. Although the RFC 3954 does not determine any Netflow UDP port number, common values used by Cisco are ports 2055, 9555 or 9995, 9025, or 9026.

SNMP “Simple Network Management Protocol” is a standard that helps different devices on the network share information. It is used to manage and keep track of network devices and their performance. SNMP is recommended for every day monitoring situations, such as bandwidth utilization, CPU loads, or interface status, and many other parameters.

Although SNMP is also an excellent tool for capacity planning, it doesn’t help much when identifying traffic patterns and their applications.

Netflow also provides a means to monitor a network, but it uses an entirely different method than SNMP. The following table shows the fundamental functionality differences.

Some of the most significant differences between Netflow vs SNMP are:

Some applications are written using pcap libraries (libpcap, Winpcap, or Npcap), to be able to capture traffic and analyze it, some examples are Wireshark and tcpdump.

Wireshark is considered a packet capture software that relies entirely on pcap. It captures traffic packets and analyzes them precisely as how they look on transmission.

Below is a screenshot of Wireshark in action. 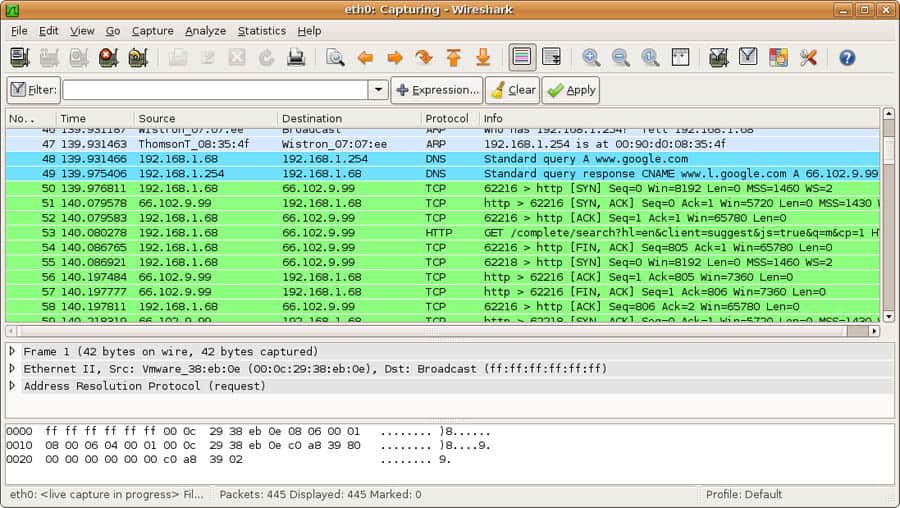 What are the main differences between a pcap software (such as Wireshark) and Netflow?

The following chart shows their difference in functionalities.

Thanks to their differences, Netflow and pcap are best when used together. They are frequently used as a killer combination for network forensics and general troubleshooting.

Netflow gives you an efficient and quick monitoring solution, so network admins can be updated when something changes. But having access to full packets with Wireshark (or other pcap solution), give admins access to the whole communication process.

sFlow stands for sampled Flow and is used for exporting packets at the data link layer. It is a stateless packet sampling protocol designed for fast monitoring samplings. sFlow can provide statistics on different protocols from Layer 2 to Layer 7 of the OSI model.

The main differences between Netflow and sFlow regarding functionality as explained in the chart below,

The main differences between Netflow and sFlow are:

The Evolution of Netflow and What is Next?

There is a high chance that we’ll continue using Netflow, SNMP, pcap, sFlow, and other protocols to watch our network traffic.

But the network traffic monitoring technologies have been evolving dramatically — from Netflow, sFlow, IPFIX, and now Huawei’s NetStream. Another significant variation of Netflow is Flexible Netflow (FnF) which is an extension to NetFlow v9.

We’ll probably stop using some old protocols and improve others.

For example, IPFIX and FnF allow different vendor IDs to be placed in their identifier, allowing to capture and collect any data, probably more than SNMP. When these technologies are improved, we’ll probably see less of SNMP around.

SP Staff Staff from Software Portal use this Account to update site with latest News, Reviews, Software Updates and Anything that needs to be changed on the site. Some Members from Our Staff include Programmers, PHP/Web Admins and General Tech Experts.