CHONG JINN XIUNG ends the year with a look at the Toshiba Satellite M100.

It is safe to say that strong aesthetics are a must for most laptops these days. But the Toshiba Satellite M100 is not all about looks, it boasts decent specs and comes bundled with some cool features.

Weighing in at 2.46kg, the M100 feels light enough that it won’t weigh you down during your travels.

The M100’s input/output devices are all nicely arranged and well spaced out throughout the laptop’s exterior. Most surprising is the inclusion of a volume control dial. I thought most laptop makers have done away with it, but its inclusion with the M100 makes tuning down loud music easier. 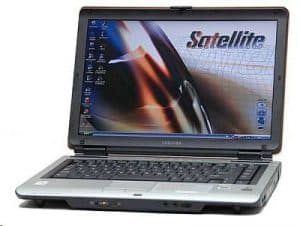 Speaking of music, Toshiba’s line of laptops have long been known to boast some of the best speakers to grace tiny laptops. The M100 is no different; it comes with a pair of Harmon/Kardon speakers, which sounded better than any other laptop speaker I’ve heard so far.

While they can’t go toe-to-toe with dedicated desktop speakers, you will definitely turn some heads when you crank the volume up.

Not a multimedia machine

Under the lid lie a keyboard that is nicely spread out and the laptop’s 14in LCD screen.

While the display isn’t a widescreen, it still is pretty decent to watch movies on. One drawback, however, is the screen is a tad too dim even with the brightness maxed out.

It is clear that the designers of the M100 perceived that more and more people love to watch their movies on the go. So to make the experience closer to that of watching it at home, they have included a handy little wireless remote control that supposedly powers on the computer and watch DVD movies on it.

To its credit, the M100 has a decent graphics card that can handle some current PC games, though you may have to tone down the graphics in order to maintain smooth frame rates.

A laptop for the paranoid

While inclusion of a fingerprint scanner in notebooks is nothing new, the M100 goes the extra mile to keep your sensitive information safe and secure.

In true spy-movie fashion, you can log into your laptop by scanning your finger. While the login screen is same as in other laptops, you merely have to swipe your finger across the reader to gain access.

The fingerprint recognition software actually guides you through the entire set up process and makes sure you know how to swipe your finger across the reader (yes, it takes skill!). Jokes aside, the security feature not only locks unauthorised users out but also limits the access to selected programs and files (locked away in the MySafe folder).

It’s all in the corners

The M100 keyboard layout is well spaced out and features some nifty media buttons to boot. The keys have a nice soft rubber cushion effect to them, making it extremely comfortable to type on.

The media buttons offer the usual quick access to the web browser and media player while the rest are used for controlling the media playback functions.

The touchpad is definitely on the small side and a little squashed, but it is still functional in cases when you don’t have an optical mouse nearby. However, you would be better off using a regular mouse.

Toshiba has added its Touch and Launch feature to the M100’s touchpad. The feature works whenever it senses pressure on one of its four corners and automatically launches a menu containing pre-defined (which can be customised) shortcuts.

While the feature does come in handy, there are times when the launcher opens when it is not supposed to. Still, it is a good attempt at improving the user friendliness of laptops.

Powered by an Intel Core 2 T7200, the M100 is sturdy workhorse that can take the burdens of modern office applications.

While testing the laptop, it did not falter under the weight of running several programs at once. Best of all, the laptop runs silently right from the moment it starts up till the time it shuts down.

The downside is the battery only lasted for one and half hours before needing a recharge.

The M100 also comes with some handy software like Toshiba’s ConfigFree programs, which includes some handy applications that can help simplify wireless and wired connectivity. Other bundled programs include create recovery disks and power management options.

Overall the M100 is a decent laptop that can perform under pressure, thanks to its dual-core processor. Its light weight and low heat output also make it very versatile.

The fingerprint recognition software is a cool feature to have and definitely helps improve the laptop’s overall security. The inclusion of Toshiba proprietary software also makes it a worthwhile buy if you are a first time laptop user.

So, if you are looking for a notebook strictly reserved for work and can live with the fact it isn’t the best entertainment centre, then the M100 might be right for you.

SP Staff Staff from Software Portal use this Account to update site with latest News, Reviews, Software Updates and Anything that needs to be changed on the site. Some Members from Our Staff include Programmers, PHP/Web Admins and General Tech Experts.